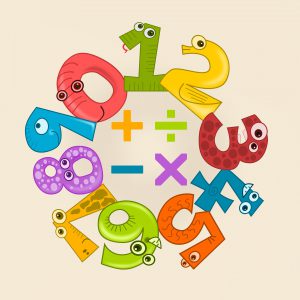 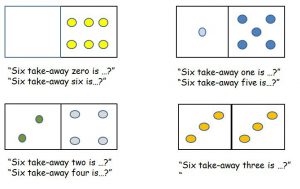 Point to the double zero domino and say, “Zero take away zero,” (Place your finger over one side of the domino.) “is?”  Wait expectantly.  With any luck your child will chime in with the answer.  If not, state the answer and try again.  After she gets it right, ask her to show and tell you “zero take away zero is zero,” in the same manner you showed her.  Move on to one.  Show and tell One minus zero equals one and one minus one equals zero.  Continue on through the piles.  In each pile, start by subtracting zero, demonstrate the converse, then move on to subtracting one, demonstrate the converse, then go on through the stack until at last you reach the double.  The picture above and to the left illustrates the “six pile.”

Will your child magically remember all her subtraction facts as a result?  Probably not.  This is nonetheless a great way to help her remember.  The patterns and colors of the numbers and the visual and aural input are very good for enhancing memory.  Furthermore, the dominoes correspond to specific triangular flash cards.  Whichever fact families she has difficulty with, pick out those dominoes for review.  Review with the dominoes, drill with the triangular flash cards, and watch the number of facts that must be re-mastered rapidly dwindle.  When you’re done, you get to 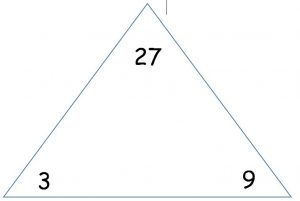 This is a great time to work with your child to make triangular flash cards for all the multiplication fact families you’ve just discussed.  Your child now has the dexterity and handwriting to be a real help when manufacturing triangular flash cards, and the exercise helps him begin to memorize the facts.  We used triangular flash cards for our addition and subtraction, but just in case this is an new idea for you, I’ll explain.  Triangular flash cards show an entire fact family on the face of the card.  The card above and to the right is the “3×9=9×3=27, 27/3 = 9, 27/9 = 3 card.  If you wanted to drill your child on multiplication you’d hold the card up with your thumb over the 27 and say, “three times nine equals…?”   Traditionally the product of the multiplication goes on the top and the two factors go on the bottom two corners.   Later we’ll use these exact same cards to master division, so it will pay you to do a good job manufacturing them and store them in a safe place.

When you’re done manufacturing the cards together, drill him on these facts, praising him for mastering so many facts so quickly.  It should go very quickly indeed.  You can highlight these facts on a multiplication table, such as the one I’ve provided for the purpose of tracking your progress. 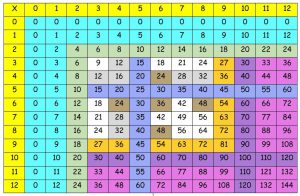 Here is a PDF Multiplication Table you can print out.  It is a good idea to highlight all the facts your child has mastered, more or less as this mastery is demonstrated.  It’s good for morale!  Here’s another one of my technicolor tables.  Yes, I love color.  You should have already highlighted the zero and one facts.  Point out to your child that multiplying a number by two is the same as adding doubles.  6+6=2×6=6×2=12, for instance.  This means that he already knows his “times two” facts.  Have him build the triangular flash cards and drill him on those facts, just to make sure it sticks, but you should be able to color in the “times two” facts I’ve highlighted in light green.

The next easiest facts to master

are all the “times ten” facts.   Explain to your child that twenty is literally two tens, thirty is three tens, forty is four tens, etc.  Alternately, explain that in order to multiply ten times seven (for instance), he need only hold up seven fingers and count up by tens to the seventh finger.  He can use all ten fingers for 10×10=100, all ten fingers and one ear for 11×10 = 10×11 = 110 and all ten fingers and both ears for 12×10 = 10×12 = 120.  As always, make the triangular flash cards and drill – but I’d be surprised if mastery took long at all.  The “times five” facts, which I’ve highlighted in periwinkle blue, are mastered in much the same way the times ten facts are.  For 8×5 = 5×8 = 40, have your child hold up 8 fingers and count up to forty by fives on his fingers.  Again, ten fingers and an ear will do for 11 and ten fingers and both ears will do for 12.  Make those flash cards and drill, drill, drill.  Mastery will take a bit longer this time.  When it’s done you get to color in all the “times five” facts.

The pink facts aren’t hard either.

11 x N = 10N + N.  If Algebra wasn’t your thing, then consider that eleven times three is just ten times three (30), plus three equals thirty three.  Bear with me.  Look at the chart below.  Your child has memorized his times ten facts.  He can do this.  It’s new, but it’s not hard.  Spend a day or so mastering these.  It’s time well spent.  Make the flash cards, drill a bit and highlight the “times eleven” facts.  You and your child have plowed through more than half the chart and it’s been pretty easy.  the rest will be easy too.

12 x N = 10N + 2N.  Again, if you and Mr. Al Gebra were never pals, hang in there.  Read the chart.  Your child has memorized the “times two” and the “times ten” facts.  Putting them together won’t be so bad.  See what I mean?   Notice that the charts are shrinking?  You didn’t really need the “times five” facts in either chart.  The facts are getting slightly easier, but there will be fewer and fewer to each set.  As always, make the flash cards, drill to mastery and highlight the newly mastered facts on the chart.

“Times Nine” and Other Oddities

Notice that there’s only six “times nine” facts left to be mastered.  Yes, if you count backwards and forwards separately, there are eleven, but you don’t have to MEMORIZE eleven.  If you memorize the six you’ll get eleven mastered, which is a pretty good deal!  This time we’re going to work a pattern to get our answers.  We now know what it means to multiply by nine, so it doesn’t matter if we cheat a bit to make memorization of these facts easier.  Firstly, please notice that all the “times nine” facts have digits that add up to nine.  For example, 3×9 = 9×3 = 27.  2+7 = 9.  As another example, 7×9 = 9×7 = 63.  6+3 = 9.  There’s another pattern. The first digit of our answer is always one less than the number we’re multiplying with nine.  The answer to 3×9 =9×3 has the first digit “2,” which is one less than three.  The answer to 7×9 = 9×7 has the first digit “6,” which is one less than seven.  If all this gives you a throbbing headache, read the chart.  I honestly think it’s easier.  Train your kid to perform this drill for the “times nine” facts, make the triangular flash cards and drill, drill, drill.  Highlight your latest triumph and look at what’s left to be mastered.  Not bad!

So let’s have a look at the “other oddities.”  I’ve highlighted the “times four” facts in tan.  You can generally teach your child to “double” the “times two” facts.  For some reason doubling numbers is easier than many other addition and multiplication tasks.   Your child has memorized that 2×3=3×2 = 6.  “Doubling” the answer to the “times two” fact to get 4×3=3×4 =12 is pretty easy.  This works well for all most of the times four facts.

The “times three” facts are worth teaching some children to count by three.  Then they can calculate the answer to “times three” multiplication questions by counting up as they did with the “times two” facts.

Some of the “times eight” facts can be taught by “doubling” the applicable “times four” facts, but I think the bag of tricks is running thin.  Near the end here, the best way forward for most children is brute memorization.  Make your triangular flash cards and drill to mastery.  There aren’t that many left to memorize.

you should celebrate – but don’t throw away your triangular multiplication cards!  You’re going to need them in order to master division facts, and your child will need to review his multiplication facts many, many more times.  It takes a few years before they will stick for good! 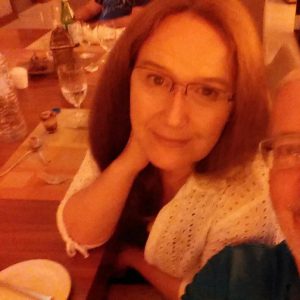 You don’t call; you don’t write; it’s like we’re strangers!  Seriously, I’d love to hear from you.  Drop me a line in the comment section and let me know how you’re doing.  Was this article helpful?  What else would you like to read about here?  Do you have any ideas to share?

Have your say in the fastest, easiest way possible.  Click on a star below to rate this post.

This is great. My son is a year old now and I think that this type of resource is very necessary for parents with kids of school going age. It will allow you as a parent to add a different element of learning to their curriculum. Please keep up this great work.

I was always good with multiplication facts but not addition. I still have to count my fingers..lol, so bad! I think I will use my dominoes and do a refresher! Great information to help children tackle math in a fun way! I think when kids are confident in math, the rest of schooling is a bit easier.

These are great strategies especially for kids that tend to get overwhelmed and frustrated when asked to memorize times tables. We certainly didn’t have these strategies when I was a kid (I’m 54 years old), but at least I can use these strategies to help teach my grandchildren. Thanks for sharing 🙂

Hi Elizabeth,
All of these are such helpful strategies… why is it I don’t remember having these tools and methodologies when I was a kid? They are really great, I have several nieces and nephews that could benefit from them all, as they are all different ages. My sister homeschools them and this entire website would be a wonderful resource for her! I am going to share this with her and send her your way.

Thank you, Jen. These strategies weren’t offered to me when I was in school either. If they were I would have learned to love math sooner!